Have no fear, though. The guy says his Yorkie protected him.

Via the Idaho State Journal:

In the upcoming semester, Idaho State University professor Jeff Meldrum will be teaching an experimental course titled The Relict Hominoid Inquiry. Part of that inquiry will address scientific theories on Bigfoot, alongside other links in the human evolutionary chain.

“It’s not a course about Bigfoot,” Meldrum said. “What I’m trying to do is address a shift in perception that’s been gaining traction in the anthropological community.”

That shift involves looking at human evolution as a tree in which scientists are discovering new branches all the time.

“Each year it seems like there are more discoveries,” Meldrum said. “The phylogeny is becoming bushier and bushier.”

The theory is that offshoots of human evolution are recent and could still exist, roaming the earth undiscovered. Therein lies the course’s connection to Bigfoot. Discussion about the Yeti is also referenced in the course syllabus.

Via one of my local TV stations:

The Gulf Coast Bigfoot Research Organization (GCBRO) is convinced that not only is there a Bigfoot, but there are in fact bigfeet scattered across the countryside, even as many as 30,000 creatures (a number they admit is a “wild guess”) from the Pacific Northwest and across the South from Texas to Georgia….

During our conversation, Landsdale shared some of the best places in America to spot Bigfoot, including the following:

The so-called “Monster Central,” about 1500 acres, 30 miles south of Shreveport Louisiana, is actually on Landsdale’s property, where he first laid eyes on a Bigfoot 20 years ago and where the GCBRO does many of their hunts. They’ve most recently spotted a female bigfoot along with her child, though since the GCBRO team only wants to harvest a male specimen, they didn’t pursue. Landsdale says these are sharp, corn-feeding creatures, but they can also be fearless. When the creatures allegedly started killing Landsdale’s pets, he resolved to kill one for study.

The Toledo Bend Reservoir, on the Sabine River between Texas and Louisiana near the city of Natchitoches, is a prime area for Bigfoot sightings, sometimes generating two reports a month. The GCBRO has seen “packs” of Bigfoot here, roaming across four or five parishes.

Landsdale reports there is heavy activity continuing along the Sabine River through Greg, Harrison and Panola counties in Texas. Five months ago a GCBRO group saw a total of five young creatures scampering around the area in a single day.

The Kiamichi Mountains are a hotbed of Bigfoot activity. A GCBRO member that owns 40 acres in the area claims to routinely get Bigfoot visits around his cabin. A word of caution: The creatures in this area are said to be especially aggressive.

The GCBRO says they receive anywhere from three to five reports a week from up and down the river and its tributaries in the Mississippi Wildlife Management Area (WMA). Other times, an entire month will pass without a report. Based on this and other evidence, the group has concluded that Bigfoot individuals and families of up to 10 creatures are probably hunting in geographic loops on a roughly 72 hour cycle, originating from their bedding area, moving to various hunting grounds, and back to their bedding area. As with much of the South, it’s theorized that Bigfoot prefers this area for the climate and abundance of vegetation and animals.

This area is best known for the Fouke Monster, aka “Southern Sasquatch,” near the town of Fouke in Miller County, Arkansas. A book and a number of films have been made, based on this legend. Fouke was the first known variety of sasquatch, with only three toes (Bigfoot species can have three, four or five toes), and are aggressive, prone to killing pigs and terrorizing people. Landsdale believes the three toed creatures may be inbreeding, making them more aggressive than their four and five-toed cousins.

The Appalachian Mountains in the northwest part of the state, particularly near the Benton-MacKaye Trail off Highway 515, are said to get sightings four or five times a month. Though this is one of the hottest parts of Georgia, caves provide refuge from the heat and there is abundant vegetation and animals.

The west coastal areas of Washington State have several reports of sightings, including Kitsap County, which has had quite a few sightings in 2014 alone, as well as Bumping Lake and Skooum Valley. The coast is said to be preferred by these sasquatch for the climate, as it’s never really hot or cold, and there’s plenty of available vegetation and meat. Again, the sasquatch in this region tend to be less aggressive, more likely to be loners, and stay away from people.

Bluff Creek is famous for the hotly debated Patterson film, showing footage of “Patty” in 1967. Since then, male tracks have been found in the snow in the area. Caves provide protection from the elements between hunts, which persist all winter, as Sasquatch don’t hibernate.

Images of Dyer’s kill began circling the internet this week, and it wasn’t long before mainstream outlets like TIME magazine were giving valuable press to the “man who shot Sasquatch”, running stories about how Dyer baited the beast with Wal-Mart ribs nailed to a tree outside San Antonio. He claims that after the big guy was studied (we’re never told by whom), his body was stuffed and preserved. Now Dyer is touring the country with the dead body in the back of his trailer, charging curious onlookers a few bucks a pop for a peek behind the curtain.

If this all sounds a little, well, fake.. that’s because it is. What the media isn’t mentioning is that this isn’t the first time that Rick Dyer has “killed Bigfoot”. 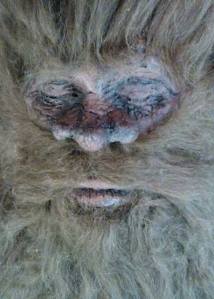 Monster-hunter Rick Dyer claims he shot and killed Bigfoot — because that’s what you do when you find a shy, rare creature — and is now touring the country with its dead body. Today he released this picture of his Bigfoot trophy.

Over at Cryptomundo, Craig Woolheater has been following the Dyer saga. He notes much more even-handedly than I would that this face doesn’t quite resemble other images that Dyer has released of this Bigfoot. Hmmm, could this be faked? Sorry, cryptid fans — I’m going to go with “yes.”

Read more at Cryptomundo and judge for yourself.

…in Portland, Maine or anywhere else! But Christa Thompson, the Fairytale Traveler, has the scoop.

The only one of its kind, the museum showcases a bizarre, extraordinary and diligent collection of mythical and unusual creatures from around the world. In other words, if you’re looking for the Jersey Devil or Bigfoot, this is your best bet at finding them.