In Greek mythology, a cyclops is a giant with a single eye in the middle of its forehead. Yet again, we are indebted to Christopher Columbus for our earliest European account of cyclopes in the Americas. On his first journey, he claims the Taíno people of Cuba described a race of one-eyed people who lived somewhere to the southeast in a land called Bohio. Bartolomé de las Casas and others have suggested that Bohio is (all or part of) the island of Hispaniola. According to de las Casas:

He also understood [i.e, from his informants] that, far away, there were men with one eye, and others with dogs’ noses who were cannibals, and that when they captured an enemy, they beheaded him and drank his blood, and cut off his private parts….

Beyond the cape which they saw before them, extended out another headland toward the East, which the Indians on board called Bohio, and said it was very large, and contained inhabitants with one eye in their foreheads and others which they called Canibales, and spoke of them with many marks of fear; as soon as they saw the ships were taking that course they were struck with terror, and signified that the people went armed, and would devour them. The Admiral declares that he believes there is some truth in their representations, but thinks that these people described as possessing arms, must be a race of some sagacity, and that having made prisoners of some of the other Indians, their friends not finding them to return, concluded they had eaten them. This, in fact, was the opinion entertained of the Spaniards by some of the natives at their first arrival.

Nothing is said about these cyclopes being of unusual size. I’m sure, though, that they were fearsome enough however tall they were! 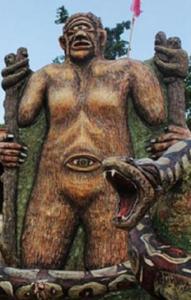 Whatever can be said for the accuracy of these reports, passed as they were through several layers of “interpreters” who didn’t understand each other’s languages, there are indeed legends in the Americas about one-eyed monsters. One of these is the mapinguari of the Brazilian and Bolivian rain forest. Mapinguaris are Bigfoot-like creatures with a horrendous—though not entirely fixed—appearance:

The body of a giant bear; the backward-turned clawed feet like those of a giant armadillo; the face appears monkey or even human-like; trailing a cloud of flying beetles; and a roar like endless thunder. In some areas, the creature is said to have two eyes, while other accounts talk of it having only one, like the Cyclops of Greek mythology. Some versions mention a gaping, stinking mouth in the monster’s belly through which it consumes humans unfortunate enough to cross its path. Some legends even attribute it the powers of the supernatural, and even speech. Classic stories describe it as a werewolf-like Indian shaman who discovered the secret of immortality, but paid for it by being transformed into a horrible monster. To see it is to come face-to-face with the devil himself!

Among those who believe such a creature might actually exist (hint: this is a small number!), the prevailing theory seems to be that it is, in fact, a giant ground sloth: an animal thought to be extinct for thousands of years.

Giant ground sloths notwithstanding, there are also cyclopes associated with the mythology of the American Southeast. In Choctaw mythology, the divine hero Hatakachafa once slew a one-eyed monster who had been terrorizing a forest. Similarly, the Cherokee sometimes (though infrequently) depict the forest monster Tsul ’Kalu or Judaculla as a one-eyed giant.

[Quick note: In preparing this blog, I ran across a very brief and informative discussion of Christopher Columbus and the creatures of Greek mythology by Jason Colavito. As I mentioned in my cynocephali article, I strongly suspect that Columbus’s ill-advised conviction that he had reached Asia colored his expectations of the sorts of wondrous things he stood to encounter, perhaps just over the next hill or on the next island. I commend Jason’s article to you.] 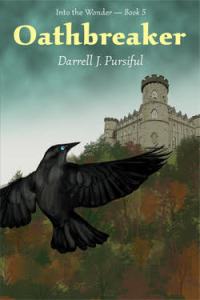