A Facebook friend shared this article from the New Yorker a few days ago: “The Uncanny Resurrection of Dungeons & Dragons.” Apparently, D&D is growing in popularity forty-some years after it first hit the hobby store shelves. I won’t say D&D is cool again, though. It was never cool in the first place—that’s why I loved it!

According to Neima Jahromi, the author of the article, a “circle of life” story seems to be unfolding as at least some people are rediscovering forms of entertainment that don’t involve video screens and can even require sitting down at a physical table and interacting with one’s friends in real time. According to Jahromi,

In 2017, gathering your friends in a room, setting your devices aside, and taking turns to contrive a story that exists largely in your head gives off a radical whiff for a completely different reason than it did in 1987. And the fear that a role-playing game might wound the psychologically fragile seems to have flipped on its head. Therapists use D. & D. to get troubled kids to talk about experiences that might otherwise embarrass them, and children with autism use the game to improve their social skills. Last year, researchers found that a group of a hundred and twenty-seven role players exhibited above-average levels of empathy, and a Brazilian study from 2013 showed that role-playing classes were an extremely effective way to teach cellular biology to medical undergraduates. 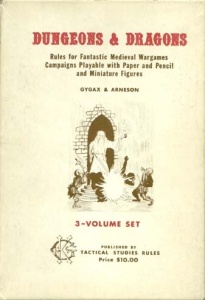 I first played D&D in sixth grade at the invitation of a group of friends who thought it would be something I’d be interested in. The pitch, loosely paraphrased, began, “Now, don’t laugh, but the name of this game is ‘Dungeons and Dragons.’ It’s kind of hard to explain.” Intrigued, I showed up and was introduced to three tan booklets packed in a white box with a picture of a wizard blasting goblins (or something) on the front. (Thinking back, I can’t for the life of me remember who was there. I’m pretty sure we were playing in Bryan Beecher’s basement, though. As it turned out, these guys weren’t my go-to D&D buddies in years to come.)

I gave up D&D in college, mostly because I lacked the time. Second, third, fourth, and fifth edition passed me by without even making a blip on my personal radar. But when I started writing Into the Wonder, I started thinking of my worldbuilding tasks as if I were running a new campaign and trying to get my homebrew setting and house rules to work right. (I even managed to get a jokey D&D reference into the first book.)

Along the way, I discovered several other RPG systems and settings that helped me hone in on how magical creatures, powers, and artifacts might work in terms of the story I was trying to tell. Without even thinking about it, I began to accumulate the free PDFs and online extras you can find for GURPS supplements, Changeling: the Dreaming, and other settings and rule sets.

So now I’m working out the details of a different story world for a new set of characters with new sets of abilities. And for the first time, I’ve been experimenting with setting down at least some of this information intentionally in the form of a “rules supplement”-type document.

Along the way, I’ve discovered that a coworker, who has never really gotten into RPGs before (at least not seriously), has a growing interest because it’s something he has started doing with a group of friends outside of work.

And along the way, I have once again found myself bonding with a friend over a shared interest in a geeky hobby.

And also along the way, our conversations have led to exploring the possibility of me crafting a one-shot RPG session set in the world I’ve been creating for the past four or five months. Wouldn’t that be cool?

Funny how things circle around, right?